skip to main | skip to sidebar

The wonderful world of Noro color.

Next week's Spotlight newsletter will feature the magnificent yarns by Eisaku Noro, one of the world's most renowned fiber colorists. Using primarily hand-made processes to create his yarns, he has engineered a production process that minimizes energy consumption and is gentle on the environment. That's because it was the earth and the beauty of nature that first inspired him.

Be sure to sign up to our newsletter so you'll receive your own copy of Spotlight when it's released next Tuesday.
Posted by Deborah Knight at 10:21 AM 5 comments:

I love it when a group of people work together to create something truly beautiful. You know...the whole is greater than the sum of its parts.

Mickie is a Raveler (Mickieswall)who was interested in the Ladybugs for Lesa shawl design created by the very talented Annie Smith. Annie is not only a valued Yarnmarket customer, she's also a designer who won a prize in the TKGA Contest we sponsor. It was a surprise to us that she lived nearby -- and an even greater surprise that she shopped here -- when we contacted her about her achievement.

Mickie was intent on making the Ladybugs for Lesa design so she mentioned on Ravelry that she liked it, but was having trouble reading the charts. Onto the scene stepped Cheri, another Raveler (Dartfrog) who was wonderful enough to re-work the charts so they're a bit easier for everyone to use.

This is the result. Isn't it fantastic? We're thrilled that Mickie liked the pattern that Annie first developed. And we're so appreciative that Cheri stepped in to help us all out.

And the winners are...

Announcing the winners of our Facebook "Like Us" contest!!! The following people will receive a $100 Yarnmarket Gift Certificate and one for a friend.
Marcy Stellfox
Judy Reichler
Gerry Hartsoe
Please contact me at deborah@yarnmarket.com right away to claim your prize!

Thanks to all of you for joining us on Facebook. Please let your friends know about Yarnmarket so they learn about all our wonderful yarns, patterns, needles...and the odd stray critter that happens to visit us.
Posted by Deborah Knight at 11:28 AM No comments:

Save 20% off your favorite brands including Madelintosh Special Order Colors

Yarnmarket is having a special sale event where you can save a lot on your favorite brands.

Be sure to shop today to take advantage of our sales...and be sure to subscribe to our newsletters so you'll be among the first to know about our special offers.
Posted by Deborah Knight at 11:00 AM 1 comment:

Universal Radio in Reynoldsburg has strengthened my faith in humanity. 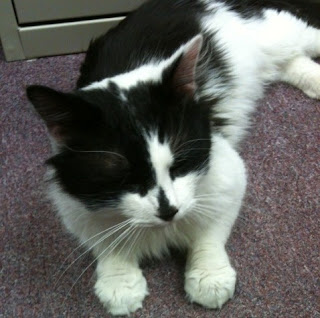 Just when you're feeling like people don't care anymore, something happens to restore your faith in humanity. Today, Universal Radio in Reynoldsburg, OH has made me believe that there is a lot of unrewarded and unrecognized kindness out there in the world.

About two weeks ago Alex spotted a pussycat on the side of the highway, near Highway 256 and Interstate 70. It's not a good place for a pussycat to be. As a matter of fact, I can't think of any place worse. Alex pointed out the cat to me, knowing full well what my response would be: we'd have to try to save it.

Well, he got across four lanes of traffic and pulled the car to the side, but when I got out to try to catch the pussycat, he ran away. I was upset...but I didn't want to risk chasing him into traffic.

About a week later, Susan our designer came into the office saying that the most beautiful cat in the world was on her deck and that her daughter, Caitlin, was trying to care for it. When she described it, I knew it was the cat we had seen near the roads. That poor pussycat had been outside in snow and rain for at least a week.

I drove over to Susan's house and got the cat. Soon, he was quite comfortable inside Yarnmarket where Stefanie and Michele fussed over him and made him feel welcome. We posted signs on all the doors so people would know we had a cat inside, and to please not let him out. He likes to sit at the window and watch the squirrels that come to eat the peanuts we leave out for them.

Stef and Michele named the pussycat "Zorro" and he's been very happy here while I was away for a few days. When I got back yesterday, I phoned the vet to make an appointment so he could have all his shots and be neutered. I know...it's not a nice thing to do to a guy, but he's reached the age where it's necessary.

While we've been caring for Zorro, I've been trying to find a home for him because he's really a gorgeous, and affectionate pussycat, and we can't keep him here at Yarnmarket. A lot of shoppers don't want a pussycat near their yarn (he's in the office section and the yarn is kept in closed bins in the warehouse), and some of our Yarn Martian staff aren't too thrilled with me keeping a cat around. I guess they haven't yet figured out that my goal in life is to become the person referred to as, "the crazy cat lady." The only thing between me and 47 housecats is an asthmatic husband.

I checked to see if he had a chip, but he didn't. And I've posted on all the local Lost Cat boards, but no one has claimed him. So if you're looking for a really nice pussycat and you live in the area, please let me know. (One person who expressed interest is in the Boston area, so I may have to spring for airfare.)

He's really healthy, according to Dr. Shields, and he's going to have all his shots and be neutered...so whomever is kind enough to adopt him won't be saddled with those expenses.

As I've been posting on Facebook about the pussycat, I received a note from Vinny Pinto, who is a friend of Katrinka (the Fabulous Feline). He mentioned a shop in Reynoldsburg -- about 1/2 mile from here -- that has all sorts of cats! I took a look at the site he directed me to and it's really something. They've got shots of cats from all over the world. I sent a photo of Zorro along with some info about our search for an owner.

I received the most wonderful email from Barbara at Universal Radio, who jokes that she's become a "cat addict." I thought I'd share it with you:

Thanks for sharing, Zorro is a beauty! I hope he finds a good home. How kind of you to take him to the vets and get him neutered.

We also do a good deal of "rescue" work with stray and feral cats and kittens. It seems that there is a never ending cycle of them. Poke around our website if you get a chance, there are many beautiful cats from all over the world.

We have our "office" cats, employee cats and customer cats on our site.

Now, isn't that fantastic? These people are doing such wonderful work with cats!

You might want to visit their site and have a look. This is the sort of company I'd want to do business with...and I'm thinking that maybe Alex could use a new radio.
Posted by Deborah Knight at 12:33 PM No comments:

If you like us as much as we like you, you'll want to enter our Facebook contest. Here are the details:
It's easy! Just get your friends to "Like" us on Facebook. We'll award THREE prizes of two $100 Gift Certificates -- one for you and one for your friend who likes us.

Here's how it works:

* Tell your knitting and crocheting (and spinning!) friends to "Like Us."
* On January 31, we'll choose THREE friends of Yarnmarket on a random basis.
* Each person selected will win a $100 Yarnmarket Gift Certificate for themselves.
* Each person selected will be asked to give us the name of their friend who "Likes" us, and we'll send them a $100 Gift Certificate, too!

The more friends you get to "Like" us, the better your chance of winning! (Just be sure to tell them to give us YOUR name if they win.)

You can tell as many friends as you want. (The more, the better!) Contest ends at midnight Pacific Time on January 30. Three winning entries will be drawn on January 31.
Posted by Deborah Knight at 7:31 AM No comments:

Yarnmarket's Bulletin features 20% off all Prism and Bernat yarns!

Jan sent out another bulletin this morning and we're getting lots of response to our 20% off Prism sale. If you've never treated yourself to these wonderful yarns, now is the time to do so.

I used Prism shortly after I started knitting because I didn't have to use any clever stitchery to create a masterpiece. Just about everyone I knew received a gorgeous Prism yarn scarf for Christmas that year. When one of my friends lost hers, she insisted I create another because she loved it so much. (I suspect she didn't so much "lose it" as have it "borrowed without permission.")

What I love about the Prism Stuff yarns in particular is that you knit them really quickly because you can't wait to see what the next yarn is like! (Stuff is made of several complementary yarns tied together.) I think every knitter should give these yarns a try because they're so much fun and they make fantastic gifts.

Jan also presented lots of new yarns we've added since her Newsletter at the beginning of the month, and she announced we're now giving 20% off Bernat yarns.

These are great value-priced yarns that knitters and crocheters love -- especially for baby items. Be sure to check out the savings because they're a particularly great value right now.

Oh...another new item she introduced in the newsletter is Mary Ellen's Made By Hand Therapy Gel. It's a quick-drying gel that contains white willow bark used for thousands of years in Europe and China to relieve inflammation and pain. Made By Hand Therapy Gel soaks right into your hands so there's no greasy feeling, and many knitters say it makes the yarn flow like silk along their hands. If you've got dry, chapped hands or arthritis, you might want to give this new gel lotion a try because it's getting rave reviews.

Be sure to sign up for our newsletters so you'll get all our releases delivered right to your mailbox each month. We promise we won't share or sell your email address.

Hope you're having a good Tuesday. We're waiting for one of customers to visit us with her pussycat. It's been like Critter Central here the past couple of days. Yesterday, Donnely brought Ms. Mercy (the pussycat Alex found in our garage in July) and then Tina, who makes sure all our orders are processed each morning, brought in the sweetest little puppy. She adopted him last Friday. I think this means that Lisa will be bringing in her new puppy, Leroy, that she picked up last night.

I don't have any pets to bring to the office with me. Well, unless you count Alex. But as pets go, he's not a good one. He's not obedient and he's always getting up on the furniture.
Posted by Deborah Knight at 11:12 AM No comments: